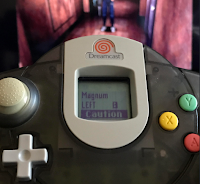 Suggestion to know the Resident Evil series Resident Evil is a well-known series but it is more than 20 years old and inevitably there are many young people who never had contact with the beginning of everything. With that in mind, I want to suggest the versions that I believe offer differentiated experiences and that allow you to dive into the essence of this franchise. - Resident Evil (PC) The first game in the franchise has an image closely linked to the Playstation and contributed a lot to its success, but the American version for PC brought something more, greater difficulty and resolution. In this version we have scenes in color and without censorship, there is no possibility to adjust the difficulty and we can meet the real survivor. The original game without the subsequent modifications. The game is for Windows 95/98 so it is necessary to invest in compatible hardware for that system or install a virtual machine on the PC, I emphasize that a bug occurs with Jill when pla
Postar um comentário
Leia mais
Mais postagens