Those who started games long ago should remember that it was not a concern to have very specific categories for games. They were simply spaceship games, racing games, fighting games ... we just played and had fun, we were purer players, but over time new categories were being imposed by the "experts", taking away the simplicity of things. I think normal people when looking for a game still think simple, if they want a spaceship game, for example, they imagine a game in the old arcade style and not in a category like shoot 'em up. Thinking this way I was able to sort a large number of games in a simple spreadsheet, creating categories that are intuitive for me considering my childhood experiences, so I can organize games in SD memory considering factors such as category, blocks needed etc. I didn't find anything on the internet.

After many hours of work researching covers and translating Japanese I was able to achieve a satisfactory result, including in the spreadsheet compatible accessories, required blocks, number of players and other information. I did not consider for the accessories those little relevant or very rare, the fishing rod for example and very restricted and inherent in compatible games. 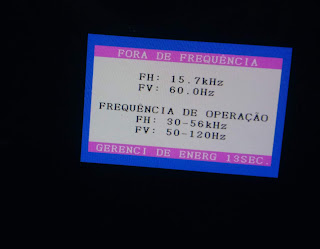 In VGA compatibility I initially considered the cover information, there are many compatible games that do not have this information but this will require testing. In *Dino Crisis for example VGA compatibility is not full, the game works ok but CGI animations run at 15kHz and hardly someone has a compatible monitor in 2019.
For these tests I will use, when I have time, a CRT monitor because It shows a warning on the screen that the frequency is incompatible. In this type of case I include the information "PARTIAL" in the spreadsheet.

Finally, after many hours of work and since I will hardly have much time to continue it, I am sharing this spreadsheet for anyone who wants to make personal use of it or for any community interested in continuing the idea.

- The names of the games are the actual names of the files. I simply used a "tree" command in the Windows console to write the names of all game directories to a text file.
- I included games for Win CE as it is important for those who use emulators.
- I didn't include GDEMU because pretty much everything works but in the future I want to include some that has a problem.
- I put only accessories relevant to Dreamcast, those that cover many games or are indispensable as the pistol.
- Vibration, VGA and 4X memory can be compatible with most games, testing is required.
- Age rating can be helpful for your mom to decide what you can play. I converted the Japanese and European classification to ESRB but the criteria are subjective. As can be seen, Americans tend to censor eroticism and release gratuitous violence, while the Japanese tend to liberate eroticism and censor gratuitous violence.“The categories I created work for me, but not for anything that keeps you from altering them or even some worldwide gaming organization adopts it.
- In the visual column I refer to games that have some visual extension in VMU, such as Resident Evil 2. I didn't consider mini games because I didn't find it relevant.
- In blocks must the amount needed to save will be useful in deciding which VMU to use.
- In the players column I show the maximum amount of players.
- In the Tip column I insert something that helps me to remember the game, is something subjective.
- In the KEYB / MOUSE column I marked the games that claim to support this, but I didn't go deeper to know if it's something related to internet browsing or to control the game. Need to verify.
- Information on the number of blocks needed is not always present on the cover of American games and never on European games.  In this case I searched the Japanese, always has this information.


*This game is a special case because even after I tested it on a 15Khz compatible the monitor frequency did not change when the scenes started. In this case S-Video may be an option, although with lower graphic quality. In Soul Fighter, for example, there is no such problem because the game works entirely at 15Khz.
CARTÃO DE MEMÓRIA Dreamcast DREAMCAST GAMES games GDEMU gdrom MEMORY ORGANIZAÇÃO SD CARD SPREADSHEET 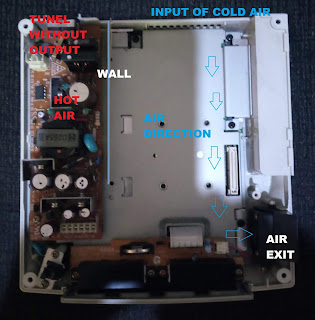 Looking at the Dreamcast cabinet, I found that its configuration does not favor air circulation efficiently in order to remove hot air. There is an air inlet at the rear and an outlet in the side, however next to the source there is a plastic barrier that creates a dead end tunnel making it difficult for air to circulate there. Plastic wall As a solution to favor the drag of hot air to the cooler I chose to create an opening in the back of this plastic wall. With a pair of scissors, I made a new fit in this plastic to allow it to be placed further ahead and leave an opening for air circulation at the back of the power supply. In the next photo is the final result. It is important not to use Dreamcast with the lid open if you are not using a GDEMU 3D printed that blocks this top opening left by GDROM as the cooler will be less efficient by pulling more air from outside than inside the case. Using a 3D print will further help divert the air to push the hot air colu
Leia mais

How to know for sure what version of your Dreamcast

We know that it is possible to check the version of dreamcast looking at the number circulated on the label underneath it, but as it is a very old console many have already undergone maintenance and may have had the board changed, even have left the factory with a number that does not match the version. In the case of Brazil for example this label does not even indicate the version. Checking what is written in the GDROM is also a method that does not give you the answer entirely because you can only discard one of the three versions. The correct method to be 100% sure about the Dreamcast version is to check directly on the motherboard and there is an easy way to check this without having to dismount it completely. There are three holes under neath the board where the controls are connected, through them you will be able to see written "VA" and a number.
Leia mais